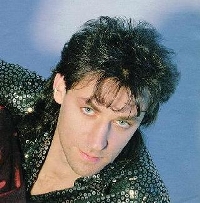 10/11/2007 : Bishop audio, Axel Breitung's records company, released a series of 4 compilations called Euro Dance Classics, gathering many of his eurodance rare and unreleased tracks. For instance, did you know that LOFT's It's Raining Again and Indra's Anywhere were previously recorded by Real Hype ? Get them here.

Chairman of the Bishop Production (created in 1977), his name has become a synonym of high-quality Eurodance.

Axel was born on 21st August 1957 in Rheydt. He had high industrial education (specialized in metals and construction), but music took over in his life. His strong side was always composing. He literally lives in his recording studio. Already for his first hardrock band 2nd Hand he wrote the main songs, but real success came to him in German pop music. During his 'pre-Silent Circle' years he has composed about 150 songs, among others in 1982 for totally unknown by that time.

As a keyboardist and composer he created the group Silent Circle, with the vocalist Jo Jo Tyson and the drummer CC Behrens, in the mid-80s. The group released 4 albums and many Best Of compilations, and had a great success with hits like Touch in the Night, Stop The Rain In The Night or Every Move Every Touch.

Meanwhile, Axel became an engineer in Bishop studios in Germany. That's how he happened to be the engineer in DJ Bobo's first album Dance With Me. Then one day DJ Bobo himself asked him to produce his second album There Is A Party : the result was a huge succes all over the world in 1994 contributing to make of DJ Bobo one of the most succesful eurodance and pop music artists in Europe, and a superstar in all the German-speaking countries. From that moment Axel and Bobo became unseperated brothers, co-producing all his following albums. Together they made Bobo's style evolve to more modern euro and even pop music.

During the years 1994 and 1995 Axel made his spot as the biggest producer in Bishop studios. He began to write and to produce gorgeous Eurodance hits for a lot of artists and projects, some of them very well-nown some of them almost anonymous, developing an instantly recognizable style.

2001 : Axel Breitung took part to the composition of Modern Talking's album America. He also produced Vanessa Amorosi's Every Time I Close My Eyes.

2002 : He produced a new project named LITD feat. Senad & Johnny MC. Their first single is entitled The Message Is Love and it is said that it sounds like a real eurodance hit. Axel himself took part the the choir, with Natalie Suleiman and Christian Sommer.

Projects to which Axel Breitung took part as producer or songwriter :