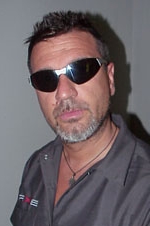 Gianfranco Bortolotti is the example of self-made man, who in the late 80s reached fame and fortune in the music scene, importing in Europe the House Music as it was just at its beginning. Clashing against old Italian music business settings , creating a revolution in the music business expanding his model of business all over the world.

Gianfranco created his first project named Cappella, releasing titles such as Bauhaus in 1987 and one year later Helyom Halib. He became one of the most popular producers, not only in Europe but also in the US. The same year, he founded Media Records label.

Since 1990, Media Records had been ons of the innovative leaders of reality music independent business in the whole world. Gianfranco managed to create hits for every label he opened or project he created : Clock, 49ers, Anticappella, DJ Professor, East Side Beat, Antico, Fits of Gloom, Clubhouse, Sharada House Gang... He was the first producer to try a new kind of production that consisted in making the DJs and the musicians work together, he's invented the studio workstation. He created new sounds, called Media Sound, the Mediterranean Progressive, and now the Supertechno, what he called the new "Sound of the Future". He produced and remixed the now famous DJs Mario Più, Mauro Picotto, Gigi D'Agostino, Dj Gee, Prezioso and many others. He is described as an artist, a creative man, but also an entrepreneur capable of being always ahead of time.

Gianfranco Bortolotti loves to learn and discover new fields of interest : driving helicopters, motorcycles, motor boats, sailing, philosophy and paintings. He sponsored Valentino Rossi as he was a young teenager : some years later Valentino became the most popular and capable motorcycle rider in the world.

2000 : this was the beginning of another new musical era : BXR was a new concept of music and DJ team under the supervision of Gianfranco Bortolotti. Team was composed by Gigi D'Agostino, Mauro Picotto, Mario Più, Ricky Le Roy and Joy Kiticonti. Gianfranco Bortolotti was also the first producer to release David Guetta and Bob Sinclar's first productions.