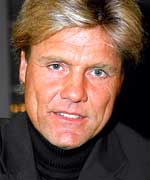 08/07/2019 : Dieter Bohlen published the official videoclip for his remake of Modern Talking's Brother Louie remixed by Stereoact. Video was done by Dieter Bohlen and Thomas Radeck.

26/04/2019 : A new Dieter Bohlen album was planned for release, but it was finally cancelled to preserve his family life (thanks to Michal)

06/05/2017 : A new 3CD compilation entitled Dieter Bohlen Die Megahits featuring the biggest hits created by Dieter Bohlen will be released on May 19th.

06/03/2012 : Dieter Bohlen composed a song called Joyrider for DSDS (German casting-show of Pop Idol franchise) Top 10 candidates. The song will be used as theme for Opel ads. (Thanks to Dance Music News)

He is one of the most famous German producers, who had more than 100 tracks in the German charts, more than 50 time #1 worldwide, more than 160 millions of records sold, and more than 400 gold and platin records. He is often called "Pop-titan" and his distinctive musical sound is sometimes described as "Bohlen-sound".

Dieter Günther Bohlen (1,83 m tall) was born on February 7, 1954. His parents were Hans and Edith. He was the oldest son and lived in Oldenburg (North-West of Germany). Dieter's father was an hydraulic engineer and had also a business in constructions.

When he was 10 years old, Dieter already started playing the Beatles' music, then he began to compose his own songs. Dieter competed in contests, but his songs weren't a success near the general public. Next to playing the guitar, Dieter learned also to play keyboards. At this age, Dieter was already certain he would become a musician.

After Dieter passed the examinations with success he had to put his dream aside again to go to the university of Göttingen. Far from his parents' authority, he could develop his musical skills with many different bands. Besides these additonal activities, he wrote about 200 solo-songs, hoping record companies would be interested in his skills. But he always received the same letters back, telling him they didn't need him.

One of Dieter's favorites places was the discotheque 'Afro-Asiaten-Heim' in Göttingen. Here, he met his wife Erika. They lived 10 years together, before they married.

But one day Intersong asked Dieter if he was still interested in a co-operation. The contract was very demanding but he accepted. He aslo released a single under the pseudonym of Steve Benson but once again with no success. On the other hand, he made his name as a soundartist and producer. He got some goldrecords with some of the artists he produced. In 1989 there were two songs in the Eurovision-songcontest written by Dieter.

His collaboration with Thomas Anders began in 1983. They created the Modern Talking project in 1984, and after a slow beginning, their first song You're My Heart, You're My Soul finally hit the charts in 1985, followed be many huge hits. In the meanwhile Dieter creted the CC Catch project aroung the singer Caroline Müller. With this group, he was almost even successful as with Modern Talking.

But things were getting worse and worse between Dieter and Thomas. In the middle of 1985, Thomas got a nervous collapse. Thomas' wife, Nora, just worsened the situation with her attitude. The last time they appeared together was at the end of 1986 during the Formel Eins tour and finally they split in 1987, and short after Dieter, who was demanded everywhere as a composer, writer and producer, presented his new group called Blus System. This was the beginning for another success story...

In 1988 the singer of CC Catch decided to break her contract and leave, and she won the trial which allowed her to keep her scene name. In the beginning of 1989, Dieter got an award from the Soviet artist-union, meaning he was the most successful artist in the USSR (before the Beatles, Abba and Michael Jackson). Besides Blue System, he kept on producing many artists and groups such as Foolish heart, Hit The Floor, Double Trouble, Major T, hidden behind pseudonyms such as Dee Bass, Art of Music or Joseph Cooley.

In 2002, he released a compilation called The Greatest Hits, with songs he had written for Modern Talking, CC Catch, Bonnie Tyler, Touche and Millane Fernandez. In 2002, he wrote his biography Nichts Als Die Wahrheit.

In 2003, Dieter Bohlen was one of the jury members for the two seasons of the German version of the "real-TV" program Pop Idol : Deutschland Sucht den Superstar. He had written 2 albums for Alexander Klaws, the winner of this show, and an other album for the second finalist Daniel K.

In 2003, he wrote another book entitled Hinter Den Kulissen. It contained Dieters comments about Thomas Anders and the reasons behind the second break-up of Modern Talking. Due to the lawsuit filed against Dieter Bohlen, the first edition was banned from sale. The second edition, which did not include some chapters (due to the court's regulations) was released on October 27.

Elli was the winner of the second season of Deutschland Sucht den Superstar. This Is My Life, her first and only single together with Dieter Bohlen was released on March 22nd.2004. Their collaboration stopped there, since Elli didn't like anything that Dieter wrote.

In 2004, another book was released on Dieter Bohlen. It wasn't written by himself, but by the German music producer Frank Farian (La Bouche, Boney M, Milli Vanilli...). It was essentially a "hate book" against Dieter Bohlen : Stupid Dieser Bohlen - Die Wahrheit und nichts als die Wahrheit über den Pop-Hochstapler, (Stupid This Bohlen - The Truth and Nothing But The Truth About The Pop Impostor). Frank Farian's book was a response to Dieter's book Hinter Den Kulissen, in which Dieter Bohlen had made some unfavorable comments about Frank Farian. Frank Farian claimed that Dieter did not sing himself (while it appears that Dieter Bohlen may not have been singing the lead vocals in the chorus of most Blue System songs, he is clearly singing the verses in all Blue System songs), did not write his own music/stole the songs of other musicians, had no success outside of Germany (a statement that ignores the sales success of Modern Talking and other Bohlen productions in many countries outside of Germany), etc. Some rumors also implyed that he had not written his books himself, and even that he had beaten up his former wife and she ended up in hospital.

Dieter announced that he would release the soundtrack for his new upcoming movie Dieter. Der Film. It's an animated comedy based on Dieter Bohlen's first autobiography Nichts als die Wahrheit. He will sing couple of songs himself, but there will be no solo album from him this year. He also did the background voice on the movie. Dieter - Der Film was finally never released for the cinema.

The same year, in September, Dieter released a perfume called Provocation. The perfume bottle were shaped from his initials : a D for the man version, a B for the woman version.

2005 : Dieter was among the jury of the real-TV show Deutschland Sucht Der Superstar.

2006 : Dieter Bohlen wrote a song for the Romanian project Indiggo. The song competed but was not chosen to represent Romania for the 2006 Eurovision contest. He also wrote another book, entitled Meine Hammer-Sprüche. 2 years after it was completed, Dieter - Der Film was finally played in February on the channel RTL and was watched by 5 millions of German viewers. The soundtrack of the movie (containing 12 songs recorded under his name, and 5 songs of Modern Talking) was released in March.

2007 : he recorded a duet with Mark Medlock entitled You Can Get It.

2008 : Dieter was nominated fot the Echo Awards 2008. He composed a song for the German artist Oliver Lukas entitled St Tropez and produced DJ Ötzi's last single Noch in 100.000 Jahren. He is still a member of the DSDS jury. He released a new book : "Der Bohlenweg: Planieren statt Sanieren".

2010 : Dieter Bohlen re-enlisted as jury member for the next seasons of real-TV show Das Supertalent

2011 : Dieter was again a part of the jury in Deutschland sucht den Superstar new season.

2012 : Dieter Bohlen, still DSDS jury member (along with Bruce Darnell and Nathalie Horler from Cascada) composed a song called Joyrider for DSDS Top 10 candidates. The song was used as theme for Opel ads.

2019 : he's been jury member in real-TV casting show DSDS since already 16 seasons, and in das Supertalent since 12 seasons. He wears Camp David clothes almost all the time, because he has signed a contract with the brand. he even released his own Camp David clothes collection called "rowing club".

Thanks to Kizoo and Andrei Dinu