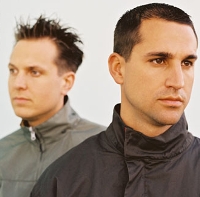 04/10/2020 : One year after the EP, Blank & Jones released the Marcus Loeber Ambient Mix of their song Hourglass

12/01/2020 : Discover the videoclip for Blank & Jones new song The Light, taken from their forthcoming album #WhatWeDoAtNight 2. Their next album Relax Edition 12 is almost ready and they are also working on a so8os Reconstruction Mix

Piet Blank & Jaspa Jones are the best example of a young generation of DJs and producers, together with names like Mellow Trax, Paul van Dyk, ATB or Kai Tracid. The two attractive young men are spinning every weekend for at least 3000 partying people and it doesn't matter where if those people are in Miami or Münster, Buenos Aires or Berlin, Zürich or a very small town. The main theme is always : Party !! and all their guests know that that's why they always come together for their DJ gigs.

The fact that DJ Culture is the second album of Blank & Jones within 12 months, is something new in the 12' business and a note for the special thought of those two to put new ideas into Trance Tunes. How much people from other countries respect Blank & Jones, is shown by the intro of the album DJ Culture, which is spoken by the Electric Legend Dieter Meier of the Swiss Cult Project YELLO.

Blank & Jones not only love the music, but they also have a pretty good life besides that. This year they were again on their truck on the world's biggest party, the Love Parade in Berlin and they also spinned for the fourth time at world's biggest indoor techno party Mayday. Names like Westbam and Marusha once started at this party.

2002 : their new single was entitled Watching The Waves. In September they took part to the Dance United project, created to help the victims of the floodings in Germany. They released a single called Reach Out on the 30th of September.

2003 : Piet Blank presented Viva's broadcast club rotation on the 1st of March. They released their new album called Relax on the 7th of April. The style was ambient/chill out. Thier next single was called A Forest.

2004 : Blank & Jones album Monument will be released on the 22nd of March. The next single features Elles and it's called Mind Of The Wonderful. It was out as vinyl on the 26th on February, then available as CD maxi in April. The follow-up Perfect Silence was out in the 12th of July. It features the voice of a female vocalist called Bobo. It reached #4 in the German DJ playlist. At the end of July, they appeared live at Nature One 2004.

In August they released a special single DVD of Perfect Silence (with both video versions and many extra features), then a few days later Blank & Jones The Mix Volume 3, a double CD compilation mixed by themselves, including many of their own tracks among tracks from other artists.

2008 : The new Blank & Jones album is on the way. Called The Logic Of Pleasure, it was released on June 6th 2008 and 3 days later in the UK. The name of the new single was Miracle Cure, and it was a cooperation with Bristish artist Bernard Sumner from the band New Order.

2011 : After the 4th volume of So80s (pronounce "So Eighties") compilation they released the previous month, Blank and Jones extended the concept with the artists editions dedicated to OMD, Ultravox, Heaven 17 and Kajagoogoo. In June, their new single was released. It was entitled Pura Vida, featuring vocals by Jason Caesar. This is their first single from the just released Relax Edition Six album.

2012 : in March Blank & Jones released a new compilation entitled So90s [so nineties]. They produced Sandra's new single Maybe Tonight. In July, new double CD album Relax Edition 7 was out, along with new single Happiness. Album Relax-Jazzed was released in October, then came a new So80s (So Eighties) compilation in December.

2013 : in February, a new, remastered version of their album DJ Culture was out. In June, they released a best of album entitled Relax - A Decade 2003-2013 Remixed & Mixed

2014 : after a new So80s compilation in April and Milchbar vol 6 in May, they released their Relax Edition 8 album in August

2015 saw the release of albums Milchbar Seaside Season 7 and Relax Edition 9 and a new, completely remastered version on their first album In Da Mix including some unreleased songs.

2016 : in April, they released their new single, logically entitled April. It was included on compilation Milchbar Seaside Season 8. In June, Blank & Jones released vol 10 of their compilation series So8os. In August, they performed in Cologne cathedral. An album entitled Dom (means Cathedral in German) followed. In December, they released a new album called Silent Piano (Songs for Sleeping) featuring Marcus Loeber as well as a collection entitled Quiet Christmas on Spotify.

Blank and Jones biography was last updated Sat, May 17th 2014


Links to Blank and Jones

Complete your Blank and Jones collection


More about Blank and Jones