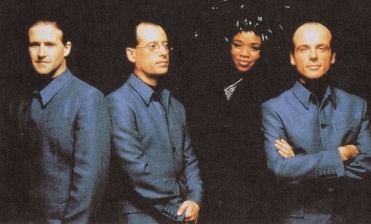 16/09/2019 : A 30th Special Release of Black Box's hit Ride On Time with disco mixes was released last week. A VIP Mixes package by Patrik Remann is also planned for September 27th (thanks to Denis Zakharov).

04/08/2018 : Black Box welcome a new female vocalist called Celestine Walcott-Gordon, who also does stage appearances. She did vocals on their new single Everyone Will Follow released in May. Meanwhile, their frontlady Catherine Quinol also tours 90s festival as Katrin from Black Box.

06/09/2007 : The Black Box hit that will be remixed by Benny Benassi and re-released will be Everybody Everybody (thanks to Tavi Meran)

30/08/2007 : More than 10 years after his brilliant remix of Ride On Time, Benny Benassi remixed another Black Box's hit single : Everybody Everybody (thanks to Tavi Meran).

13/10/2002 : The first Black Box fansite has just open ! It gathers all infos about the Italian project and all the related projects created by their producers.

Black Box is made up of three Italian studio musicians : Daniele Davoli, Mirko Limoni and Valerio Simplici, collectively known as Groove Groove Melody, based in the Regio D'Emillia area of Northern Italy. Simplici was a clarinet teacher and played in the La Scala Classical Music Orchestra in Milan. Davoli was a well known Italian club DJ (known as DJ Lelewel), largely at the Marabu Starlight Club, while Limoni was the computer and keyboard whizz-kid of the trio and had previously engineered for Italian pop stars such as Spagna. The Groove Groove Melody team were established as one of the top two production outfits in Italian dance music, knocking out more than a dozen singles a year in their native country.

In their different productions, they often use the face of French model and singer Katrine. Katrine was spotted by Spagna's guitarist at a club, and after introductions featured as vocalist on Ride On Time. The single became the first of a series of Italian House records to cross over to the UK charts, staying at number 1 for six weeks in 1989. It also reached # 1 in Israel, Italy, Spain, Germany, France and the European chart. Controversy reigned when it was realised that the single had included some samples of the voice of singer Loleatta Holloway from the Love Sensation single she made with Dan Hartman in the late 70s. A deal was eventually worked out with Salsoul (who owned the rights) as both companies benefited from 800 000 UK sales.

The Groove Groove Melody team were also behind the production of Starlight's Numero Uno and Mixmaster 's Grand Piano, another prime example of 'Italo-house', and another crossover hit. Under seven or more pseudonyms, they turned out numerous further records. However, as Black Box their hits included I Don't Know Anybody Else (a Top Ten smash in the U.S. as well), Everybody Everybody (the last of the Ride On Time trilogy, which featured vocals by Martha Wash. It reached # 2 in Israel, and entered the top 10 in UK), and Fantasy, a revamp of the Earth, Wind And Fire hit (which entered the Top 10 in Israel and reached # 9 in UK). The group's debut LP, 1990's Dreamland, was also a success.

Actually, since Martha Wash's voice was at first used as sample for Everybody Everybody, she was finally asked to reinterpret the whole title... Then to sing for the complete album Dreamland. Katrine was just lipsyncing on stage... Martha's voice was also used by projects such as Seduction and C & C Music Factory (Everybody Dance Now). She finally tired of ghosting vocals, disavowed all her session work, and filed litigation for proper crediting, winning a solo recording contract in the process. Black Box went on to cast Charvoni Woodson as their featured singer.

After the single Get Down (featuring the rapper Stepz) and a Megamix, they returned in 1991 with Strike It Up, another American Top Ten entry. They were also responsible for, among other remixes, ABC 's 1991 comeback single, Say It.

After Ride On Time '94, 1995 saw the release of single Not Anyone, but their album Positive Vibration was not very successful.

2007 : Everybody Everybody was remixed by Benny Benassi, Fuzzy Hair and whiteHEAT. A Black Box Best Of could be released at the end of the year.

2008 : Candy did a cover of the Black Box classic Ride On Time

2018 : after 21 years, Black Box were back with a best-of compilation called Superbest and a new single entitled Everyone Will Follow featuring vocals by Celestine Walcott-Gordon, who seem to be the new vocalist and official frontlady of the project. Black Box finally secured the rights to the original Loleatta Holloway sample used on Ride on Time. In December, former Bass Bumpers vocalist Felicia Uwaje released a cover of Strike It Up.

CD Now - Encyclopedia of Popular Music Copyright Muze UK Ltd. 1989 - 1998
Jason Ankeny, All Music Guide
Thanks to Florent "v_uba" and Tavi Meran
Thanks to Shimon O'Hana for the charts positions