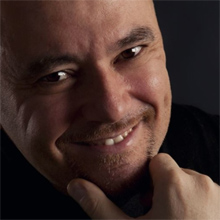 28/08/2019 : Gianni Bini is currently working on an album that will gather new versions from the greatest 90s hits of DWA records stars (Ice MC, Alexia, Double You, Simone Jay...)

Italian DJ Gianni Bini started his carreer in the late 80s in clubs in Tuscany. In 1990 he created a small recording studio and met Fulvio Perniola. Together, they created the Fathers of Sound. With Marco Galeotti and Maurizio Tognarelli, they founded eurodance projet Netzwerk in 1992.

In 1994, the Renaissance, one of the most important organizations in the UK, called him to be part of their agency DJs. In 1996 he created with Paul Martini Ocean Trax label and House Of Glass Studios, which became one of the most important studies in the world. He did remixes for international artists such as Jamiroquai, Simply Red, Kylie Minogue, Whitney Houston, and Diana Ross.