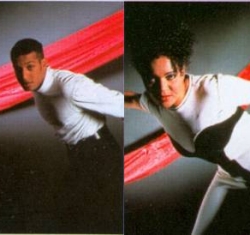 14/06/2016 : Bass Bumpers are back with a new single entitled Big Girls' Mouth. Out today under label Brilliant Beats.

08/11/2013 : A 2k13 version of Bass Bumpers's single Keep On Pushing by Raindropz will be out on November 29th under label Klubbstyle.

Bass Bumpers are two of the most creative songwriters and producers of dancefloor-hits in Germany these days : Henning Reith, multi-talented keyboard player and the person behind the sound mixing desk is the one coming up with ever new ideas for songs and sounds. He composed I Can't Stand It - a chart hit with Twenty 4 Seven all over the world, and "Caba" Kroll who contributes to Bass Bumpers with his long time of experience as DJ at the Bochum Tarm Center and arranges the productions for the dancefloor scene. He is also responsible for the Bass Bumpers management and he plans the tours with all the tour agencies and licensees in Germany and abroad.

Bass Bumpers were founded in 1990 when Henning and Caba released their first production with the dance label Dance Street. With the title Can't Stop Dancing, released in Summer 1990, the Bass Bumpers entered the European dancefloor-scene. A remixes vinyl was released the following year.

For the second production Get The Big Bass, the Englishman E.Mello (Nelan Freeman) was engaged as songwriter and rapper. E.Mello, a former member of the Starlight Express ensemble and an educated dancer, creates the choreographies for the shows. Get The Big Bass immediately sold 20.000 records in Germany and was listed in the top ranks of the DMC charts for weeks. In Spain, France and Italy Get The Big Bass was played in every club and eventually became a top 10 club-hit in the summer of 1991.

Another year had passed when record #3, The Music's Got Me, was released which caused the Bass Bumpers International break-through. The Music's Got Me was released worldwide with the newly-engaged singer Felicia Uwaje and E.Mello. The song became a hit in the sales charts in France (#16 in the top 50), in the USA (#28 in the Billboard Maxi-singles) and in Spain (#10), as well as in all important club-charts in Germany, Benelux, Italy, Austria and in Switzerland in 1992. It was a real surprise when the Bass Bumpers The Music's Got Me immediately became #25 in the UK Top 40 Charts.

The follow-up single could have been In The Summer, but, since The Music's Got Me was still doing great in the charts, they finally released it under the project name Vamoz.

They took part to the realization of one of Amanda Lear's album and also contributed to the Eurodance project Damage Control. They also remixed for many eurodance groups, such as Masterboy, Real McCoy and Maxx.

Having released the single Move To The Rhythm (Top 50 in France) and the album Advance in the autumn of 1992, the title Bass Bumpers Megabump became another smash club-hit.

The single Running was the last in the successful series of the Bass Bumpers productions to be released in 1993. From 1990 to 1993 more than 200.000 singels and albums were sold in Germany, though the official Media Control-charts were never reached.

Exactly one year later the new Bass Bumpers single Good Fun was released. In the course of this year the studio was reorganized and new license agreements were made with East West records (territory : Germany & USA) and Dance Street (territory : worldwide).

In 1997 Bass Bumpers released a single called Running ´97 which was remixed by ATB. In 1999 they were said to have released a single titled Make Up Your Mind - a rather slow house/underground club track. Actually this track was released by a project named Bass Jumpers... The Music's Got Me was covered by the project Brooklyn Bounce.

2002 : Bass Bumpers team recorded a new single entitled All I Want. It was composed in collaboration with Markus Gardeweg, and released under his name. The vocals were done by Felicia Uwaje and the maxi was published by Radikal records

2003 : The Music's Got Me was covered by the project Purestar. The Bass Bumpers team released in January a track entitled I Need More, still a cover of The Music's Got Me, with new lyrics, still sung by Felicia.

2005 : Bass Bumpers released as vinyl The Music Got Me 2005. They also planned to remix the single What You Do by DJ Absolute & Paul Holden feat Beverley Anne. They also released, under the name of Crazy Frog, a remix of the famous Axel F theme that was used for a ringtone commercial. It was a huge hit.

2008 : CJ Stone, former member of the team, recorded a single in collaboration with Milo.nl called Exciting

2015 : last month, Bass Bumpers and North2South released a 2015 version of their classic The Music's Got Me

2016 : Bass Bumpers were back with a new single entitled Big Girls' Mouth. Then they released a new version of their hit Good Fun.