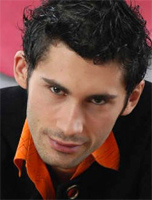 22/01/2019 : Dan Balan will be one of the coaches of Golos Kraïni, Ukrainian version of real-TV show the Voice.

12/08/2017 : Discover the videoclip for Dan Balan's new single Nashe Leto. It was directed by Serguei Solodkyi.

Composer, songwriter, producer and singer Dan Bălan was born on February 6th, 1979. He began to sing and compose rock music with band Pantheon. Then he founded rock band Inferial with Radu Buftea, Lupascu, Valentin "Vamp", Banaru and Petru Jelihovschi. They evolved to to pop-rock, but soon he realized that he needed to leave this type of music was not popular anymore.

In September 1999, with Petru Jelihovschi, Dan formed the first boys band in Moldova : O-Zone. which became the #1 band in Moldova before scoring a huge hit with Dragostea Din Tei and Despre Tine.

After O-zone split in 2005, he decided to start making rock music again. With the best musicians in his region, he moved to Los Angeles. Although Dan wrote the compositions prior to the formation of his band, it took two years to get a signature sound. He asked producer Jack Joseph Puig (John Mayer, Sheryl Crow, No Doubt, The Black Crows, Rolling Stones) to produce the record. An album was recorded in April/June 2006 at Ocean Way Studios in Los Angeles.

In 2006, he went back to dance again. Introducing an alter ego-character, Crazy Loop, he released the single Crazy Loop (Mm-ma-ma). It went #1 in the Romanian charts. The video, directed by Marc Klasfeld and filmed in Los Angeles, was released throughout Europe in the fall of 2007 and was voted the song of the year by fans. In December 2007, the first and only Crazy Loop album entitled The Power of Shower was released.

2008 : Dan released the video for the second song Crazy Loop Joanna (Shut Up!).

2010, he released Chica Bomb, his first single under his complete name Dan Balan, featuring American Katie DiCicco. It became an instant hit in many European countries : #37 in Germany, #44 in the UK and #1 in Russia and Greece. For Greek market, the song was re-recorded with the Greek singer Eleni Foureira, and they performed the song during the 2010 MAD Video Music Awards. Follow-up single was entitled Justify Sex, once again featuring Katie DiCicco. It was presented on July 31st, in Moscow, at the Europe Plus Live 2010 festival. The official video first aired on 13th October, 2010.

2011, Crazy Loop (Mm-ma-ma) and Chica Bomb were featured on Step Evolution's "ReRave" game for the iOS, Android and Arcade platforms. He released the single Freedom. Then came the Russian single Lish Do Utra (Until the morning only)

2013 : his new single was a collaboration with Tany Vander & Brasco entitled Lendo Calendo.

2015 : Dan Balan was back with a new single entitled Funny Love. 2 months later, he released the song Плачь in Russia.

2016 : he was featured by Romanovskaya on her single Malo Maliny.

2017 : his new single Hold On To Love was out. Then in August came single Nashe Leto, a duet with Russian singer Vera Brezhneva.

2018 : in March, he featred singer Matteo on his new singe Allegro Ventigo. Then in September he teamed with Marley Waters to release a reboot of O-Zone's hit Dragostea Din Tei under title Numa Numa 2

2019 : he was one of the coaches of Golos Kraïni, Ukrainian version of real-TV show the Voice.