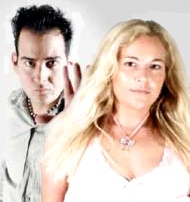 11/01/2020 : Boris Pavlovic from BPM is working on new songs and you can already discover a few demos. The new single's producer will be bmonde aka Bernd Müller)

15/06/2019 : BPM released the videoclip for a new eurodance version of their song Rock Your Body On The Floor.

Boris Pavlovic (aka BP) has been playing the keyboards for 16 years. He also has a lot of experience in various musical categories, and he contributed as keyboardist to many bands ("Vertigo", Hardrock) but he finally preferred Dance Music. After a first demo single, on which one could hear him rap for the first time, he released his first CD entitled Circle Of Fire. Then Boris created the B.P.M project, and with 2 dancers and a singer they started a regional discotheque tour in Southern Germany.

Then they took part to a large Festival, during which they shared the scene with artists such as Captain Jack, Heath Hunter and Twenty 4 Seven. After their live appearance, B.P. got his first producer contract, and produced some new songs, that he presented during the radio FR1 PowerParty-Tour . They became support-act for the boys-band Caught In The Act. After this tour, they got a new contract, for a 3 months tour including 12 open-air concerts, along with acts such as La Bouche, No Mercy and Spectacoolär. In the context of this tour they were noticed by another radio station, which allowed them to appear live on concerts and in discotheques.

In 2002 Boris covered the dance classical song Maniac from the film Flashdance, released under Allmusica. The single was promoted during a large tour, includeing concerts at the Halberg open air in Saarbruecken.

The same year, B.P. met the new singer of the project, Stephanie and re-created BPM with her again. She not only sung, but also took part to the group's planning. In 2003 Boris left his record label and released a new single called Don't Worry, this time under label Jaykay record. They contributed to concerts organized by Antenne Thuringia, Saarländischen Rundfunk or radio Schleswig-Holstein.

At the beginning of year 2004, Boris wrote some new songs. With producer Thomas Hauser he produced the title High Enough To Dream. Short after, Boris and Stephanie got an offer of the label SHIFT Music/ZYX. The new single was published on the 27.September 2004, and massively played on TV and discotheques. A tour is planned.

2005 : in March, the group recorded a new single entitled No End No Limit, once again an awesome eurodance track. BPM and Experience Of Music are currently working together on a project called Reunion Of Dance.

2008 : Catwalk To Heaven was released on the chillout-compilation Milchbar Noderney - Volume One ! The new single Shocking The Dancefloor is ready and will be out on June 13th.

2009 : Boris from BPM was involved in a new dance-rock project called United Passion feat B.P.. It's a collaboration with the 2 former members of Boundless and Groove Empire. The single was entitled Rock the Night.

2010 : BPM will collaborate with BG the Prince of Rap on a brand new track that should be recorded in January 2011.

Listen to BPM on Radio Euro Classic, the eurodance radio