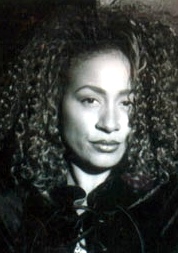 06/09/2009 : Natural Born Grooves feat Thea Austin are #1 in the Belgium ultratop (thanks to eurodance blog)

25/07/2009 : Thea Austin teamed with Natural Born Grooves and the result is a song called Bad Bad Baby (thanks to eurodance blog).

05/05/2009 : Thea Austin published a new track on her Myspace. It is entitled Put My Feet On The Rock and it's a slow rock track... (thanks to eurodance blog)

02/05/2004 : Thea Austin (from Snap and Cymurai) released a solo single called Broken Wings, which reached #8 in the USA Club chart (thanks to Denis "DJ Hooligan" Zhabkin).

Thea Austin was born in Pittsbugh, PA. She has been fronting bands, among them Snap, and honing her vocal skills since she was in her early teens. Her want for vocal success brought her to Los Angeles, looking for a recording contract. She started out performing in bars and clubs then soon began gaining session work as a background vocalist.

Also a talented writer, Thea's love of music led her to a position as a staff writer at a major music industry magazine. She then got a taste of the business of promotion and hype, as well as insight into the workings of major labels and the shaping of new artists. Her contacts continued to grow. She did demos with such writers as Samm McKinney (Patti Labelle, Anita Baker) and Stephanie Mills. She started getting album credits with artists Bernadette Cooper and Christopher Williams."I was too comfortable at the magazine. I was wearing golden handcuffs. I had a successful career as a writer while trying to maintain one as a singer. I knew I was being sidetracked and had to dedicate myself fully to singing." she explains.

That drive led her out of the country to Japan, where she opened the Club Blue Note and had the opportunity to jam with such artists as McCoy Tyner and Dizzie Gillespie. She spent almost a year in Japan, growing as a vocalist and experiencing new cultures. Upon returning to the US she immediately began work on a solo project. An accomplished lyricist, she penned songs with several successful producers. Her travels led her to Penny Ford, the former lead singer of Snap, who was working on a solo project. She sensed Thea's talent and introduced her to the Snap organization. Thea was whisked to Germany to begin work on Snap's album The Madman's Return together with the rapper Turbo B. She not only sang, but co-authored many of the cuts. Once the album was complete and the single released, a video was shot and a European tour planned.

As the lead singer of Snap she took the world by storm. The first single, Colour of Love soared into the top ten across Europe and reestablished Snap as a force with which to be reckoned. Thea began playing in venues from Italy to Germany, Turkey to the Red Sea. Suddenly, she was catapulted to international stardom. The second single Rhythm Is A Dancer was even more successful, taking a firm grasp on the number one position on numerous Billboard charts, including the Eurochart, Hits of the U.K. and charts in Germany, Italy and countless other nations with the video landing at MTV Europe #I. But, as always, she wanted more, so she left Snap in 1993, being replaced by Niki Harris.

"I have been very blessed to have such success with Snap across the globe. I cannot count how many lessons I have learned and how much total experience this has been. But I will not be satisfied until American success comes as Well. I want to do well in my own country, a country I have come to appreciate so much more now that I have been away so many times."

Her personal music is message driven, as she tries to combine the best of today's sounds with lyrics that sky a little more than what is on the surface. Thea is always working to expand her horizons. Not only a vocalist, she is an accomplished lyricist and producer. She sung lead vocals on Turbo B's I'm Not Dead. She did co-writing and producing numerous tracks for her solo project Cutoff (together with 2 German producers T. Copperfield and T. Noise). The style was great eurodance, reminding a little bit of Snap's Rhythm Is A Dancer. It was released in 1993 and had great succes in the Dutch and Israelian top 10. The second single You And Me was released in 1994, another great euro very successful in Holland and Israel.

Then in 1995 she became the voice of Cymurai. She also did background vocals on Engelbert Humperdinck's album The Dance Album. She collaborated with Karel on Live To Tell and Turn It Up.

Thea once again showed her skills by writing on cuts for Turbo B.'s solo project after he stopped his own group Centory. The same year, a single entitled Let Go was released under Thea's own name in 1996 and was remixed by ATB.

Among her other hits were the #1 Then Came You (with The Spinners) and the Grammy-winning That's What Friends Are For (with Gladys Knight, Stevie Wonder and Elton John), as well as, Theme From Valley Of The Dolls, I'll Never Fall In Love Again Alfie, Anyone Who Had A Heart, Heartbreakers, and the Grammy-winning I'll Never Love This Way Again. Her voice was featured on Heart Attack's single Eye Of The Tiger. She earned seven Top 40 singles in the Eighties alone, among them collaborations with Luther Vandross, Johnny Mathis, and Jeffrey Osborne. Overall, she's garnered one platinum, five gold albums (including 1985's Friends) and five Grammy Awards.

1999 : Thea was featured by BFL on You Won't Know What Hit Cha, a more downbeat single. She also worked with Soul Searcher on Can't Get Enough (which had a lot of success) and Do It To Me Again (# 32 in England).

2000 : Thea worked with Thunderpuss on the single I Just Wanna Be Your Everything.

2001 : in the US she recorded tracks under the name Pusaka featuring Thea Austin. The song I'm Addicted To You (aka You're the Worst Thing for Me) was written by Thea, Chris Cox and DJ Irene, and then remixed by Chris Cox & DJ Irene. It had been heralded as THE anthem for the summer 2001, and was rushed out as a remix single on May 8th, by Tommy Boy Records. "DMA Magazine" gave this new song 5 Stars, and when it was tested at the Winter Music Conference in March, it turned out to be a smash hits with the DJ's ! It zoomed to the top of the Billboard dance charts, and became #1. It could be heard on radio, and on the hit TV shows "Queer as Folk", and "Sex in the City". The other song Thea recorded, Being Without You, was scheduled to be released in the UK this summer.

2003 : Thea's voice was featured by the project Full Intention for the house single Soul Power.

2004 : Thea still seems to be under contract with Snap, at least for TV appearences. Everytime Rhythm Is A Dancer is needed, Thea can be seen, wearing extravagant top hats.

2006 : Thea released a quite confidential album entitled House It Up. She also planned release a new single entitled Delight In The Light Of Life in September. Then a new album Acoustic Austin could follow, at the beginning of 2007.

In May, she published a new track on her Myspace. It was entitled Put My Feet On The Rock and it was a slow rock track. In July, she teamed with Natural Born Grooves and the result is a song called Bad Bad Baby.