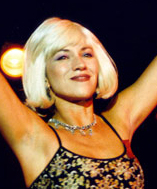 Dominique Atkins was born in the Middle East and raised in South London, where she cut her musical teeth on the classic jazz she heard from her father, a jazz trumpeter on the London pub scene. She counts among her earliest influences such jazz greats as Peggy Lee, Carmen McRae and Sarah Vaughn, and incorporated much of their rich and resonant styles when she began performing ballads in local niteries at the tender age of 13.

It was only when she left home, striking out on her own to pursue her musical dreams, that Dominique began to experience, for the first time, the seductive sounds of contempoary rock, soul and dance music. By that time, Dominique had begun to write her own material, bringing together her diverse strains of creative inspiration, while working a variety of odd jobs to keep body and soul together. "I've been a dishwasher, waitress, receptionist," she confides, "but I always comforted myself that I was doing research for songs. I couldn't just sit in my bedroom and write."

Dominique contributed to Eurogroove's Scan Me in 1994 and to the album track Don't Keep Me Hangin' On.

It was in 1995 that Dominique first crossed paths with Oakenfold and Osbourne, who were on the lookout for a fresh young talent to both write and perform on a new dance music project they had in mind. The creative fit was perfect and before long, the trio, now known simply as Grace, rocketed up the charts with Not Over Yet.

After many hitsingles and an album, Grace stopped to exist in 1997. Paul Oakenfold couldn't combine it with his DJ Schedule anymore. Dominique went further with Jazz music.

In 1998 : Dominique appeared on Elevate's single Next Life that she also co-wrote .

In 1999, she co-wrote and featured on Tilt's hit Invisble. She also contributed to Nevada's AM/PM.

In 2000, Dominique created Ursula's World with Mal Scott and Martin Freeland. They released a single entitled I Will Be With You. She appeared as guest on the Space Brothers ' Manifesto album (whe did vocals on the track I Still Love You).

In 2001, Dominique Atkins contributed to Mekka, a Jake Williams (JX) project. One single was released : Diamondback.