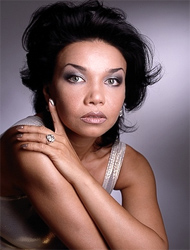 18/04/2015 : Natali Art, first Di Bronx & Natali frontlady, published a teaser of an unreleased version of Di Bronx & Natali's Izo vseh sil. She had recorded the song for project's live appearances, and it was not included on first album Zona Vsemirnoi Vecherinki (thanks to Klems).

22/11/2013 : If you live in Paris, you can take piano lessons with Natalia Artemova, former Di Bronx & Natali vocalist. More infos

Natali Artemova (real name : Nataliya Artsiomava) is a jazz singer born in Mineralnye-Vody (region of Stavropol) on November 8th 1969. She then settled in Borisov with her parents and did musical studies at the conservatory of Minsk. At the age of 22, she became solist in Belarus national Orchestra.

She was the first vocalist of the D-Bronx & Natali project. " These times, I do not remember living at home. My son was little, my parents lived in Borisov, and in my rented apartment in Minsk there was always a huge suitcase standing, ready for packing, with which I traveled all over Belarus. We are constantly invited to the TV", she reminds, " We signed a major contract in Moscow, we have already programmed the price tag and a series of concerts at clubs. ". But the businessman Valery Bujak, the project's sponsor, was arrested in June of 1996 and imprisoned for 10 years for financial fraud. Natalya was deeply shocked by this news. They were pennyless overnight.

Later on, Denis announced her that the project was splitting. Natali explained that she later found out that he was tourning with a new Natali, who was lipsyncing over her vocals. She was herself advised to do the same, to tour under the name D-bronx & Natali : "Take yourself another Di Bronx and drive on a tour". She got sick.

She decided to start all over again, and this time alone. Her parents even had to sell the apartment to help her launch her new solo project. Songs were written by Leonid Shirin, aranged b Maxim Aleynikov. She planned to entitle her debut album Ta Samaya Natali. 80% of the material was already written but the album was finally never finished.

2001 : she released a solo-song : Slova Lyubvi (Words of love) which entered national top 20. In July, she was invited to take part to a collective concert called "Slavonic Bazaar" in Vitebsk. Di Bronx and Natali were also a part of the lineup. And when the show was finally broadcasted, she was shocked to find out that her part had been cut off...

Then she met a French manager and moved to Paris. It was tough at the beginning, since she did not know how to speak French. She sung 2 years in a club, then entered the conservatory at Radio France, studied at the Sorbonne University, and even took parto to a lyrical competition at the opéra Bastille. Then, she entered the cabaret Rasputin, singing Russian classics with a dozen of professional musicans, and gaining the status of European artist. She is now known as Natali Art.

2005 : she toured in France, appearing in many franco-russian events, as well as the most glamorous hotels in Paris : Plazza Athénée, le Napoléon, le Royal Monceau...

2008 : she finally released her album Par-delà les frontières (Beyond Borders), subtitled "La voix venue de l'Est" (the voice coming from East) and founded her own company with a French partner. She is promoting other artists and also runs a vocal school for children.