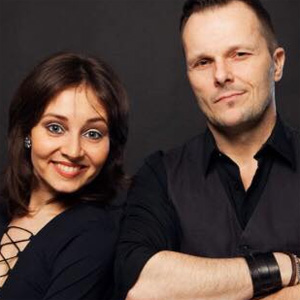 12/11/2017 : Last Friday, during We Love The 90s concert in Bratislava, MC Erik and Ivana performed a new song entitled Is This Love (thanks to Jeremy Jarko Budiac).

Composer and rapper of MC Erik and Barbara

Erik was born on 17th September l971 in Rimavska Sobota. His father had been playing the guitar and the bassguitar in a local band for twenty years. Afterwards he became his son's manager. Erik's older sister is already married and lives in Prostejov, his mother works as a laborant. Erik always loved his family very much : when he was a little boy, he used to look forward to his parents' return from work and didn't like to be alone. Erik studied the flute and the clarinet. Nowadays, he only plays these instruments on Christmas days.

All begun in August 1986, as three young musicians were looking for a guitar player for their group. This is how Maduar came to an existence. They were gradually gaining popularity among the students they used to make concerts for. Erik also did some DJing in Rimavska Sobota and surroundings. That is how he became No. 1 of  the Fun Radio competition for DJs in mixing. He joined Maduar again just when they got a synthesizer. Computer music was just Erik's cup of tea. Maduar broke through with the single I Feel Good with already Barbara as a singer. Their next hit Do It attacked the top positions of national hitlists and the album I Feel Good was ready by the end of 1994. However, Erik and Barbara decided to leave Maduar and to continue on their own under the name of MC Erik & Barbara.

In future Erik would love to continue in what he started. He likes to create music much more than rap and would wish to be conjured in a kingdom of synthesizers. However he confesses he would give up the music if it may cause troubles in his own family. He also cooperates with other formations and took part in different projects. For example, he composed a song for the group NNP , or we can notice his participation in the Bratislava Beat Mass at the end of 1995. He was also offered to compose the music for the film Tu Ziju Levy of director Jozef Holec, but because of lack of time Erik had to decline it. He also started a solo carrier besides his duo with Barbara. ). He composed a song called Vianocny Cas (Christmas time) which became big Christmas hit and on March 3rd 1998, his first album Just The Music was released.

Apart from music Erik loves cars : 'I would turn my head to see a nice car as I would to see a nice girl.'. He himself owns a black Pontiac. For him, spending money is enjoyable :'I like to spend money for good wear and good food : there is nothing better than a 'yummy' pizza. I'm glad I'm not dependent on money; money is here to be spent.'

However he didn't give up his studies. On 2nd October 1996, only three days after finishing recording of MC Erik and Barbara's new album Second Erik successfully completed his study at the University of Agriculture, Nitra. He spends most of his time in Prague, where he has found his girlfriend.

2016 : MC Erik either performs solo as a DJ, or tours with a new frontlady : Ivana Poláčková (winner of real-TV show Môj najmilí hit in 2007) during 90s festivals

2017 : MC Erik released an album gathering 7 of their old hits, re-recorded with new singer Ivana Poláčková, a new song featuring Ivana : Is This Love, and 4 new tracks with another singer called Petra.

Thanks to Jeremy Jarko Budiac
MC Erik and Barbara Website