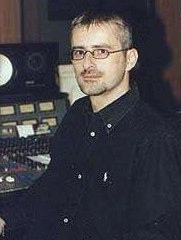 24/06/2018 : Producers Roby Arduini and Pagany teamed with Echo Motel on single Listen To Me, to be released on July 6th.

Roby Arduini inherits the passion for the music from his father. Since his early age (7 years) his family lead him to play organ and from l 0 to 18 he attended classical studies in piano. At 13 he founds his first band: he has been writing songs since and has been always workinghard to improve his creativity.

Roby's sound is strongly influenced by Genesis and progressive rock: This sound really hit his music sensibility. The best example of such influnce is a track written in 1975: The Canterbury Tales by Geoffrey Chaucer to which he composed the music. But Roby is looking for something new: he pays much more attention to American rock to improve his restless desire for an artistic communication. ln 1980 he began a new adventure assembling a big band: Dea Diva. The project totally based on sound impact.

All these attempts show his wish to become a full time musician: he wants to live the music. His dream become reality when Mauro Farina called him to play keyboards in his group. At the same time Roby starts working in Mauro studios.

The career of Roby Arduini as a producer began in 1983. From that moment his passion for music pushed him into many successful producing experiences with the ultimate goal to be in the dance charts all over the world. Some of his first tracks include: Sharada, Rose, Risen From the Rank followed by Movin' and To Go Crazy by Lee Marrow that entered the Billboard chart. The Yankees l Can't Feel It remained in French charts for a record 30 weeks. After this initial amazing success, the main indepenclent companies in Italy such as Time and Media immediately began to offer him the chance to produce their most important artists.

In the middle of 1990 he meets Antonio Puntillo. They worked on a common project. Since then, they started working closely with each other. Many companies use their creativity. The results of their fruitful professional relationship are many hits ail over the world such as:

... and many more such as Sharada House Gang, Mars Plastic, Mig 29, to name just a few.