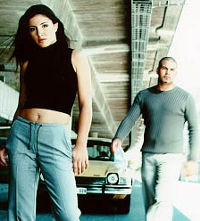 22/05/2005 : Elena, former vocalist of the project Antique, won the Eurovision contest for Greece.

This pop-dance oriented project was produced in Sweden. The group included 19 years old Elena (or Helena) Paparizou and 23 years old Nikos Panagiotidis. Both were born in Sweden after their parents immigrated to this nordic country. Their music is very dancable and combines Scandinavian beat with Greek touch. The producer team and the dancemusic creators, C&N Project, were earlier season working DJ's in the Greek Islands. Wild disco nights at Rhodes and Kos have created curiosity about the Greek culture and an interest of creating the unique Greek sound.

Elena grew up in Sweden. Her artistic talents and eagerness to excel became apparent from an early age, and she began her training in singing, dancing and acting while she was still at school.

As a matter of fact Antique managed to reach top 5 on the Swedish Sales Chart with a Greek song ! Not only that, they were also nominated in the category "Modern Dance" for a Swedish Grammy Award. Their first single Opa-Opa was top 10 in the whole of Scandinavia this summer and one could hear the song everywhere. All of a sudden everybody knew about Antique ! Second single Dinata Dinata was top 10 for 5 weeks on the Swedish Sales Chart. Both singles had reached Gold status and Opa-Opa had also reached Platinum.

With their song I Would Die For You they entered this year Eurovision Song Contest on March 6th representing... Greece and reached the 3rd place. The song was written by two well-known greek song writers, Antonios Tapas and Nikos Terzis. This led to a successful career which has included several platinum albums, a European tour, and collaborations with many highly successful artists from Greece and abroad.

They released their second album Die For You which contains light, easy to listen and want-to-dance music. The title song used such an instrument named bouzouki. This song is presented in 2 versions : English and Swedish. Simlar pop tune but with much more pronounced euro backbone is Follow Me. This is probably the song in which you can fully appreciate beatiful and strong voice of Elena. Ligo Ligo sang in Greek will give you a clear example of the sound of Greece. Very melodic tune, again with some very unique instrumentation. For true euro sound you should check Tell Me, Lonely Nights or Something About You. The album contains also some slower tunes but in overall this is nice dance offering.

Despite Antique's great success, the group's journey came to an end in 2003. Making one of her most difficult decisions ever, Helena decided to pursue a solo musical career. This brought her into contact with Sony Music with whom she signed her first contract as a solo artist.

In December 2003, Helena Paparizou released her first solo single, Anapandeetes Klisis ('Missed Calls'), a song that was written especially for her by famous singer-songwriter, Christos Dantis. Naturally, Anapandeetes Klisis became a major hit and remained at the top of the airplay charts as well as the sales charts for a very long time, reaching gold status.

2005 : Elena competed for Greece at the Eurovision contest with her song My Number One and won.