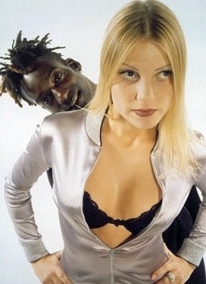 06/05/2012 : Antares and NDS vs Tom E released new remixes of the hit Ride On a Meteorite. (Thanks to Eurodance Blog)

05/09/2004 : The Polish project D-tune recently released a remix of Antares' Ride On A Meteorite.

Antares was the name chosen by Giacomo Maiolini on this particular project for which cooperate "a french vocalist of great and different musical experiences" (rumors say it was rather Clara Moroni), the team Walter Cremonini, Alessandro Gilardi and the D.J. Riccardo Romanini, the rapper Asher Senator (already known in the eighties and now come back on the music scenes). Time Records was the home for Usura, Jinny, Deadly Sins, Silvia Coleman, Carol Bailey.

Ride On A Meteorite, Antares' first single, was released in Italy in January 1995. It was out in Europe during the Spring, reached in France number 25 in the national top sales charts. Emmanuella Gubinelli (aka Taleesa) was credited in the songwriting, as well as R. Arduini, and D. Abaribi. The second rap verse ("This old man, he played one...") came actually from an English nursery rhyme : This Old Man.

The follow up You Belong To Me, released during Autumn 1995, was also very successful, reaching # 4. A remixes CD was released on the 2nd of January 1996. It was even covered by 2 other euro projects : Comet and Antenn MC.

It was followed by the song Let Me Be Your Fantasy which was also a big success, with a remixes CD including a Sputnik mix, an Apollo Mix and a Cosmo mix and a few other remixes of You Belong To Me. The follow-up to this single was Whenever You Want Me, a single without the male rap. Then, in 1997, they released the very housy I Want Your Love, once again without any rap.

In a French musical magazine, the group was presented differently : 2 French girls (Aurore and Sophie) and a French rapper (Eric Vincent). This was actually a dancers team, for performances in France. Eric Vincent also appeared on the covers of volumes 11 and 12 of compilations La Plus Grande Discothèque du Monde.

The single Bright Side Of The Sun was released in May 1995 in Germany, in the beginning of 1996 in France, by a German group, so probably no relationship with the eurodance project. The sound was hardtrance.

2006 : a remix version of Ride On A Meteorite was released as Antares vs Bigroom Society (previously known as Antares vs Clubraiders). The vinyl contained 3 mixes. It entered the Austrian DJ charts at the end of August.

Listen to Antares on Radio Euro Classic, the eurodance radio