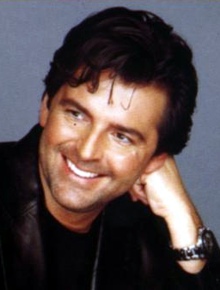 21/01/2020 : Thomas Anders revealed the titled of his forthcoming album : Einfach Liebe. But its release was postponed and it won't be out on March 13th as previously announced

Thomas Anders was born on March 1st as Bernd Weidung in Münstermaifeld/Eifel. His mother Helga ran a grocery store and a café. His father worked as a revenue officer and as a mayor of the small town Mörz. Other family members include brother Achim, who is six years older and Tanja, the pet of the family, who is 7 years younger than Thomas Anders.

Even as a child, Thomas was more an aesthete than an athlete. So he preferred music instead of soccer. His debut on stage was at the age 7 at a St. Nicholas' Day Party, where he sang Christmas carols. From that day on he knew: " I'm going to be a singer". The neighbors were able to see the birth of his career: The house boomed when Thomas turned on his cassette recorder, singing duets with Barry Manilow. Even when he went to school he took part in several talent competitions.

He took piano lessons and later he even changed schools to take music as special subject. This is how he came to Koblenz, where he is still living today. After he had passed his education, he signed up at the university of Mainz to study German Studies, Journalism and Musicology. By this time he had already performed in several clubs and discotheques.

A music competition of the radio station "Radio Luxembourg", (a highly noted and respected competition in those days) was the decisive of a career as a singer. Thomas aroused enthusiasm. However, he got no points from two of the members of the jury, and it seemed as if he had no chance for success. No ways! Those two members offered him a recording contract two days later. From that day on he called himself Thomas Anders.

In 1980, Judy the first single of the 15 year old Thomas Anders was released. Several singles followed which were produced by Daniel David. In 1981 Thomas had his debut on TV in the Michael Schanze Show "Hätten sie heut´ Zeit für uns". He performed the song Du Weinst Um Ihn.

In 1983 producer Dieter Bohlen recorded a German cover version of the song Pick Up Phone (F.R. David). At that time Thomas was an artist at HANSA, (today BMG Berlin), Dieter asked him to come to the recording studio in Hamburg to record the song together with Dieter Bohlen. Dieter Bohlen was enthusiastic about his voice. As a result he produced several German songs with Thomas, for example Wovon Träumst Du Denn ?, which peaked at 16 on the German Pop-Charts, Endstation Sehnsucht and Heißkalter Engel (German version of Send Me An Angel from the band Real Life).

In autumn 1984, Dieter Bohlen wrote the song You're My Heart, You're My Soul under the Spanish sun, which was the debut song for Dieter and Thomas. Modern Talking was born. You're My Heart, You're My Soul went to the top of the Charts and remained there for 6 weeks. The songs of the Pop-Duo were a huge success, nearly every song became a hit and things happened really fast. Soon, Modern Talking was the most successful German Pop-Duo and they got several gold and platinum records...

At the beginning of the 90s, Thomas wanted to give up making music and he spent a lot of time in Los Angeles (USA). When he felt that music was still his passion, he started a solo-career at which he can proudly look back. In the whole he has released six solo albums.

Between 1989 and 1995 he worked together with famous producers. The first one was Gus Dudgeon, known for being Elton John's producer. Their collaboration led to the album Different. The single Love Of My Own was his biggest success.

Then he started working with Peter Wolf (Sara, Everybody Has Fun Tonight) and recorded the album Souled. He went on his own solo tour throughout foreign countries, like Kapstadt, Johannesburg, Hong Kong, Singapore, Taipei, Santiago de Chile, Moscow, etc. He performed in front of as many as 85 000 enthusiastic fans.

He sang duets with well-known artists like Glen Medeiros (Standing Alone, on the album Down On Sunset), the Pointer Sisters (Feel For The Physical, on the album Souled) and Three Degrees (When Will I See You Again, on the same-titled album).

As a composer he also had some hits in foreign countries. He wrote the title song for an Argentinean Serial and went together with the Spanish artist Martha Sanchez to position 1 in the Mexican Charts.

2003 : his single Independent Girl was released on November 10th . It has nothing to see with eurodance, unfortunately. It is a mid-tempo number, which reflects both his musical future and his Modern Talking roots. On the maxi CD one could find the bonus track In your Eyes, a ballad written by Thomas himself in collaboration with Peter Ries (famed No Angels producer).

2004 : Thomas released the maxi-CD King Of Love on the 2nd of February, as well as a new single called This Time. The follow-up will be entitled Tonight Is The Night, and it will be out on the 3rd of May.

The second season of German music TV show Best of Formel Eins again featured Thomas Anders as one of the hosts of the show. The show looked back at the music videos presented on the music show Formel Eins during the Eighties. The second season of the show will have ten regular episodes and one live finale show. The first episode was aired on 8th November on German TV station Kabel 1.

In October, he released a new single called Just Dream, which entered the German singles sales charts at number 64. The song was the 10th solo single by Thomas Anders to reach the German Top 100 and the 30th chart single that featured Thomas Anders as a vocalist (including Modern Talking singles). Just Dream was not included on Thomas most recent album This Time. It was written for the show Holiday On Ice.

2006 : Thomas Anders was among the German finalists to be chosen to represent Germany at Eurovision 2006, but he ended #2 and wasn't selected. He released a new album entitled Songs Forever, and received the title of honorary Professor of Kiev National University of Arts and Culture.

2008: Thomas Anders regularly appears on stage with his orchestra to a special show called Thomas Anders Fanparty, during which he sings all the Modern Talking hits. In August, he released a new song entitled Ibiza Baba Baya, with Sound Chateau, for once a dance song. Followed Kisses For Christmas in November.

2009 : he presented his new single Good Karma at die Frühlingsshow on ZDF at the end of April. The same-titled album should be released late summer 2009. It will also include the duet with Sandra, The Night Is Still Young.

2011 : in August, title of second single from the album Two he did with Uwe Fahrenkrog was No More Tears On The Dancefloor. It will include a special club remix by Thomas Detert. In November he released an album entitled Balladen and released his autobiography entitled 100 PROZENT ANDERS: Die Autobiografie - Mein Leben - und die Wahrheit über Modern Talking, Nora und Dieter Bohlen.

2012 : next single from "the gentleman of music" (how he is frequently called on German TV) is a duet with Russian singer Kamaliya entitled No Ordinary Love. He released a Best Of album on October 3rd. and a new album entitled Christmas For You.