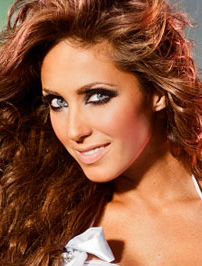 15/05/2019 : A few months ago, Anahi released a book entitled Valiente. A percentage on the book's sale will be fund to oncology section in pediatric hospital Tuxtla Gutiérrez, Chiapas (Mexico)

29/05/2016 : Anahi's new album will be finally entitled Inesperado. and it will be out on June 3rd. Next single will be the ballad Amnesia.

26/02/2016 : New Anahi single is entitled Eres and it is a ballad featuring Julión Alvarez.

14/11/2015 : Anahi's new single will be a latino-pop song entitled Boom Cha, featuring Brazilian singer Zuzuka Poderosa. Videoclip was shot in Miami and choreographed by Tanisha Scott. It is taken from her forthcoming 6th studio album Amnesia.

07/04/2011 : Anahi was featured on Christian Chávez's single Libertad. (Thanks to Abelito)

Anahí Giovanna Puente Portilla was born on May 14, 1983 (or 1982 according to other sources), daughter of Enrique Puente and Marichelo Portilla. She has one sister also named Marichelo, and a niece named Ana Paula. She started her carreer very early : at the age of 2, she appeared on a TV series called Chiquilladas. As she was still a child, she became the face of Pepsi Cola, and recorded a song called Te doy un besito which was played at the end of a children's daily programming on Channel 5 in Mexico

1989 : she appeared in the movie "Había una vez una estrella"

1991 : she played a role in the movie Nacidos Para Morir.

In 1992 she released her first album titled Anahí.

1993 : as she was only 10, she sung Mensajero del señor, a song for pope Jean Paul II during his visit to Mexico.

In 1996, she released a sophomore album titled Hoy es mañana. It was a nice eurodance album, including the singles Descontrolándote and Corazón de bombón.

2004 : she starred in Rebelde (a telenovela about a group of students forming a pop band), portraying Mia Colucci, a popular girl from a wealthy family. Rebelde was a hit worldwide and had over 400 episodes, lasting till 2006. From this massive success, the pop project RBD was created, scoring many #1 hits, selling over 20 million albums worldwide and being two time Latin-Grammy nominated. They performed most of the music used on the telenovela.

2007 : a Barbie Doll version of Anahí was released, based on her character in Rebelde.

2008 : on November 25th Anahi and Dulce Maria (one of her RBD partners) collaborated with Tiziano Ferro on a song called El Regalo Màs Grande. The same year, she launched a campaign for anorexia-bulimia awareness.

2009 : after a Gira Del Adios World Tour, RBD announced their separation on March 10. In April, Anahí announced her solo album planned for November 24th 2009. The project is tentatively titled Anahi Magia. She presented her solo single Mi Delirio at the 2009 Premios Juventud awards in Miami, Florida. It was released for digital download on August 18th, 2009. She later held 10 concerts as part of the Anahí Promo Tour to promote the single and her forthcoming album.

2011 : she released singles Pobre Tu Alma and Dividida (which as openeing theme for telenovelas Dos hogares). An album entitled Con tu amor was planned for 2015, for her 15 years of carreer

2012 : she revealed that she was morking on her new album

2015 : she married Manuel Velasco Coello, governor of Mexican State of Chiapas, but promised this would not be the end of her carreer. She released single Están ahí in May, follow by Rumba in July. Her 6th studio album will be entitled Amnesia.

Listen to Anahi on Radio Euro Classic, the eurodance radio