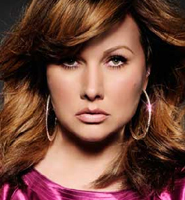 01/07/2009 : Amber's new single is called I don't believe in hate, it was composed by Kelly Mueller and remixed by Pathos V2. The single will be available on all digital megastores from 21th July 2009. It can be previewed here (thanks to eurodance blog)

25/10/2008 : Amber just signed off on 4 licenses in Germany with Dancestreet Records for her last single to be featured on 4 compilations : Disco Celebration Vol. 4, Vocal House Explosion, Gay Happening Vol. 19, and Divas of Dance VIDEO DVD compilation (thanks to Tavi Meran)

Amber's real name is Marie-Claire Cremers. She recently explained that the name Amber was chosen because in America everything is sorted by A-B-C-D in record stores, so her producers wanted her have a name with “A.” She was born in the Netherlands, and her parents loved classical music (her dad is an opera singer and her mom is a piano teacher). That was not her case, actually she always liked dance music, and she started singing after moving to Germany. As of now, she has a son and resides in the United States. She comes back in Europe for the holidays, though, to visit her family.

As she was in Germany, she met the successful producers Bermann brothers, and they decided to work together. She became the first Euro-NRG artist to be signed directly to a label as a solo artist. They recorded her first single, This Is Your Night, in New York City, and it became a hit worldwide (# 1 in Israel, #14 in the Netherlands, #11 in Australia), but specially in the USA (it reached # 21), where eurodance songs like that don't use to have more than a negligible success. It sounded a little like Another Night by the Real McCoy, but that's just because it were the Bermann Brothers who produced that song too. "When I started out with This is Your Night, the lyrics were too simplistic for me. I didn't realize back then that that would be my market niche, keeping me dumb and stupid" Amber remembers. The song appeared in the movie A Night at the Roxbury.

At the beginning of 1997, her second single was released, called Colour Of Love, (quite succesful too since it reached # 12 in Israel, #74 in the pop charts in America and #31 in New Zealand). Though she is vague on the reasons why, Amber hates this song and refuses to perform it live.

It was followed by her debut album, that contains very good dance tracks, and some ballads too.

One More Night was the next single to be released. This song was originally a ballad on the This Is Your Night album, but was remixed by Hani and became a pop hit in America, peaking at #58 on the Hot 100

1998 : a collective single gathering Ultra Nate, Amber, & Jocelyn Enriquez' voices was released under the name of Stars On 54 : If You Could Read My Mind. It was a big success, peaking to #3 in Australia, #17 in Austria, and #82 in France.

1999 : Amber, her second album was preceeded by a very succesful dance track Sexual (La-Di-Da). It went #24 in New Zealand, #40 in France, #34 in the UK, and #94 in the Netherlands. However the album, a collaboration with Rick Nowels and Billy Steinberg, was rather soft of dance style. Followed Do That To Me One More Time which is not on the US version of the Amber album.

2000 : The third single from the new album was entitled Above The Clouds. It was prominently featured on the final episode of Season Three of television series, Sex and The City.

The following single to be released was be Love One Another. It was written by Amber herself, still with Rick Nowels and Billy Steinberg. Amber released Sexual in the UK on 29th May 2000, and it could well turn out to be her first UK hit as it is getting plenty of publicity.

The same year, Amber released the album Remixed, which contained remixes of all her previous singles, including If You Could Read My Mind. It also included a popular non-album track called Taste The Tears.

2001 : Amber released a single entitled I Found Myself In You. It was written and composed by Pam Sheyne, Kyle Nevan and Alex Wilson. Then followed Yes ! which was not included on the album. It was quite succesful and peaked to chart position #10 in Israel. Its chorus was based on the final few lines of James Joyce's controversial novel Ulysses. It became a #1 smash hit in the American dance clubs.

2002 : Amber finally completed her third album, called Naked, planned for release in August. She released a new single called The Need To Be Naked, which had an incredible success in the US : it peaked #1 in Billboard Dance Club chart. The single is not real eurodance, however on a fast tempo. The follow-up was entitled Anyway (Men Are From Mars).

Amber's songs Above the Clouds and Object of My Desire were featured on the famous TV Show Sex and the City. Amber even wrote an Unofficial Anthem for the show, called Sex & the City which appeared on the Naked album.

2004 : New Amber's song You Move Me, an electro-rock track, reached #4 in USA club chart. She should soon start a tour in the US. She changed her haircut and hair colour. Her brand new album My Kind Of World, containing 12 brand new songs, was released one month later, in October. She also released Undanced a collector's Greatest Hits compilation of unreleased Club Remixes of her previous hits from the 2 previous albums, only available exclusively through her official website boutique.

The same year, she was nominated for a Grammy Award in 2004 as songwriter on Cher's cover of Love One Another.

2005 : Amber's next single was entitled Voodoo. HX Magazine's reviewer said of her Vocal Performance "Amber growls like a sexy baby tiger". She performed for the American troops headed to Iraq.

Amber performed live in Phoenix along with Kristine W and Deborah Cox. In December she released the follow-up, entitled Just Like That. It featured remixes by Jason Nevins, Belmares & Preve, Solar City vs. DJ. Rico, and others plus a Ballad Mix.

2006 : in August, Amber announced that her new single would be entitled Melt With the Sun. It's a collaboration with Igor Kisil from Sweet Rains, who had remixed her 2 previous singles. The official release date has not been set yet.

2007 : Amber re-recorded and will release new versions of 6 of her tracks : Love One Another, Yes, Spiritual Virginity, The Need To Be Naked, If I'm Not The One, Object Of Your Desire as mp3 only, on November 20th.

2008 : Amber released This Is Your Night 2008 on February 12th. A new video was shot for the remixed version of Amber's first hit. In June, Amber announced that she would shoot a video for a song whose title was not revealed yet. All that she told, is that it will be a cover song

2009 : Amber's new single is called I don't believe in hate (Drip Drop), it was composed by Kelly Mueller and remixed by Pathos V2. The single was available on all digital megastores from 21th July 2009. In December, she left the US to move to Germany : "I have released music every year since 1996 and am trying to refocus myself", she explained in an interview.

2010 : Amber plans to re-release One More Night, as many of her big hits were not released digitally because those music masters do not belong to her, but to the labels she used to be in contract with. And because there were re recording clauses in those contracts, she was not able to do so before nowadays. But she needs to find safe funds for productions.

Amber at MetroWeekly
Amber at Myspace

Listen to Amber on Radio Euro Classic, the eurodance radio