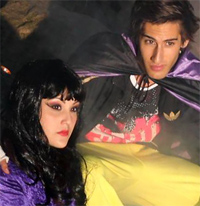 25/09/2012 : Alex's new single will be entitled Intuition, it should be out in Ocotber, and it will feature Marwa.

Already at the age of 7, Alex became fascinated when his older sister listened to different eurodance artists. As it was in the beginning of the 90's the eurodance was pretty mainstream among the teenagers.

At the end of the 90's Alex became stuck in the eurodance genre and started producing his own stuff. It wasn't until the year 2004 he released his first official record at his own record label where he and Basshunter released each own record. The very first single Don't Need Your Love was released in 2004. It featured vocals by Pernilla Eriksson.

Later in 2005 Alex met Marwa Chebil, who just had competed in Idol 2004 in Sweden. He asked her to do backvocals in his upcoming album (Past, Present & Future). Alex chose to produce his new album with old studio equipment back from the 90's to get the real eurodance nostalgie feeling.

2006 : their first video I'm Gonna Make You Mine got released during the summer, together with the album. Right now they are doing gigs in Sweden.

2007 : Alex started recording his upcoming album in the studio, the single (Lose Control) got released the same year.

2008 :  Alex wanted to release a new up-to-date sound album to get higher publicity in Sweden, so he started to produce house music. The single (Put Your Hands Up) got released in December.

2009 : Fans complained about the new style and Alex didn’t feel comfortable with the new sounds either so he started to re-record new songs with the classic 90’s style again. In October 31th he releases the single Moonlight which was inspired from the Twilight saga movies. The single will only be released digitally on restricted stores, mostly US.

On 4th of December he released his new album Self Control. For the first time, it was distributed internationally both on CD and digital. This was 3 years of hard studio work and Alex has never put as much effort before as on this album.

2010 : Alex recorded a videoclip for his single Moonlight.

2011 : Alex's next single will be entitled I Wanna Feel Your Love. In October, the title of the next single was revealed : Paranormal Rhythm, still featuring Marwa.

Listen to Alex on Radio Euro Classic, the eurodance radio