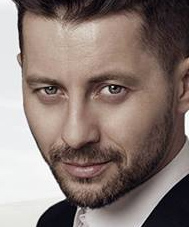 20/03/2020 : Akcent's new single is once gain a collaboration with Chante, with the famous accordion hook melody that was already used in That's My Name in 2009, and on which Edward Maya also based its hit Stereo Love (thanks to Pim)

06/12/2017 : Akcent published the videoclip of a new song entitled Getting Lucky featuring Ackym and Veo. It will be included on a new album planned for next January.

Akcent was founded by Adrian Claudiu Sînă in 1999, along with female vocalist Ramona Barta. At that time, Adrian worked as a DJ at Radio contact. Their debut album Senzatzia, released in 2000 as cassette only, was electro-pop. It contained the song Ultima Vara (Last summer), which was a summer hit in Romania. Then Ramona left, and 3 nice-looking boys took her place : Sorin Brotnei, Mihai Gruia and Marius Nedelcu. Akcent ha become a boys band. The second album În culori was released in Romania on January 10th 2002 and was certified gold within the 3 first weeks. It included the single Ţi-am promis.

In 2003, they released their third album 100 BPM, featuring the songs Buchet de trandafiri (bouquet of roses) and Suflet pereche (soulmate), which were quite successful. Then in 2004 came the album Poveste de viață (Story of a life), with a radical change of style.

Following the steps of O-zone, they gained international recognition with their European hit Kylie (#21 in France, also a small hit in North America), which was the English version of the song Dragoste de inchiriat. Followed their first album in English French Kiss With Kylie, composed with Gigi d'Agostino, and released in Europe on August 23rd 2006. Then came the single Jokero which competed to represent Romania at ESC 2006, but was not selected. Then, they released a best of album entitled Primul Capitol and started an international tour. Follow-up single French Kiss (English version of 9 mai) was a cover of Stela Enache's Extemporal la dirigenţie.

2007 : King of Disco was the name of their new album. 2 singles were taken from this album : King of Disco (an homage to Madonna, in the current disco-pop revival style) and Red Bikini.

2008 : Marius Nedelcu left the project to start a solo carreer. Corneliu Ulici, formerly from boys band Bliss, took his place. Only one single was released this year : Umbrela ta.

2009 : Corneliu left the project. Akcent released their new album Fără lacrimi (Without tears), with the now famous accordion hooks. International version of the album was renamed True Believers. Edward Maya contributed to the singles Stay With Me and That's My Name, which charted in whole Europe.

2010 : Akcent ceased their collaboration with Edward Maya, accusing him of having stolen the melody of That's My Name for his own single Stereo Love. Adrian Sână started composing alone new songs for the project, in parallel with him new solo carreer under the name Adrian Sina. New singles Love Stoned and My Passion had a lot of success, especially in Arab countries and India.

2001 : they released the single Feelings On Fire. Then came I Can't Live Without You.

2014 : in March, an EP called Around the world was out. In June, Akcent released new single Kamelia, featuring singer Lidia Buble and rapper DDY Nunes. In August, Akcent published a new videoclip : Everytime (Turn My Life Around), featuring Ronnie Bassroller.