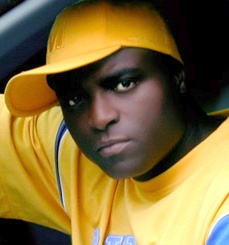 02/10/2017 : Nana's next single and video will be entitled Go Away and it will feature Manuellsen and Vessy. It is planned for October 6th.

01/08/2017 : Nana will release a 2k17 version of his song Remember The Time on August 4th, along with a new video. It will be included on his forthcoming album #BetweenLuciferAndGod.

01/07/2009 : Nana Abrokwa's first single Stand up! is in the mixing process but the release date is unknown yet (thanks to eurodance blog)

Nana Kwame Abrokwa was born on October 5th, 1969 in Accra (Ghana). At the age of 10, he came to Germany with his mother, brothers and sisters. Music was his hobby since his tender years, and when he finished school, he started a DJ carreer. He played at a lot of places and got kind of famous. He also appeared in two German movies. Then he met Toni Cottura. And they both understood that, one day, they would work together. At this time, Toni was successful with Fun Factory and producing great hits for famous acts like Marky Mark, the Backstreet Boys or N'Sync. In 1997, Toni Cottura left the Fun Factory with his partner Bülent Aris, and it was finally time for them to work together with Nana.

Nana started rapping under the name of MC Africa True (or shortly : True). He contributed to the eurodance group Darkness, with the single In My Dreams in 1995. The music was programmed and arranged by Bülent. He also co-produced some songs for DJ David Fascher (such as Make The Crowd Go Wild). Legend says that he did not like eurodance style, so he left Darkness afterwards.

Nana's first solo single Darkman was released in late 1996. The song was a big success in Europe, especially in Germany, Austria, Switzerland & the Benelux. Europe discovered a new musical style : European rap & hip hop. The real breakthrough for Nana came with the next single, Lonely. Featuring vocals by Alexandra Prince, it was a super-hit of 1997 Europe-wide, staying # 1 in Germany over 1 month. It entered the top 5 on most European charts. Then followed the singles Let It Rain (written for his Mum who passed away from cancer 10 years before), He's Comin' and Too Much Heaven from his debut album Nana - The Album. They all entered the top10 in Germany. The album featured many artists like Jan VD Toorn, Jonestown, Pappa Bear (Daisy Dee's brother), the vocalist Mazaya, Alex Prince as previously mentioned, as well as a lot of other Booya Family members.

In May 1998, his second album was out, entitled Father. Nana adopted a new style : R&B/Rap, with slower songs and more mature lyrics. He released the songs Remember The Time, Dreams (reminding a lot of the previous hit Lonely) and Father from that album, and they all scored big in the charts.

Nana first single from the 3rd album, I Wanna Fly (Like An Eagle) was released in November 1999 and it was a ballad about freedom. Then there was a big break and the planned third album was canceled, while Viva TV had already played samples from some tracks of that album during a one-hour Nana-special broadcast. Nana had worked hard and this was planned to be a big release, and a defenite hit in the charts again. Songs remained locked in the booya-bass. I Wanna Fly was a flop and after that, the Booya Family split up. Bülo couldn't release this album due to copyright problems, since all the producers and collaborators who had worked on the album had left. Nana recorded another album in the Booya studios. But since the Booya era was really over and the music world had changed a lot, this was not released the album as well. Nana finally left Booya.

In 2001, Nana did a comeback, this time rapping in German on the single Du Wirst Sehen (You will see). It was a great hit on the German club scene, but far away from the old Darkman-days. He started working on the new album which was going to be named Global Playa and would be in both English and German. But it was also cancelled.

2004 : rumors according to which Nana was working hard to get back on the scene were true. Nana released his new single Butterfly/Ride With Me, which was his first single from the new album (entitled All Doors In Flight No.7) that was released in July 2004.

2014 : Nana cotributed to a collective single with DesiSlava and Pappa Bear, Cotton Candy.

2017 : Nana released a 2k17 version of his song Remember The Time on August 4th, along with a new video. Then came Go Away featuring Manuellsen & Vessy. Both songs were included on his album #BetweenLuciferAndGod, out on November. Album included collaborations with eurodance big names Thea Austin and Ice MC.