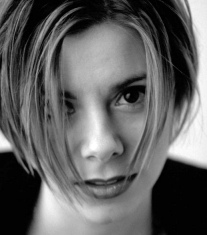 02/05/2019 : Abigail is member of a band entitled Sister Willow, with 2 other singlers called Chrissy Gardner and Megan Chenot. Their first song is entitled Jericho.

15/04/2015 : 15 years after the original release, Abigail will release a new remixes package for her hit Let The Joy Rise, with new vocals.

30/04/2013 : Abigail was featured on Bill Bouvier and Peter Barona's single I Surrender

24/06/2011 : From now until the end of August, $5 from every CD purchase of Abigail's currentl album Be Still My Soul will go to association Love146, to help fight against child slavery.

Abigail Zsiga started her carreer as vocalist for the Love Decade project. With them she recorded one album entitled Decadance.

As a teenager, Abigail enjoyed her first UK chart hit in 1992 when I Feel You hit n°33 on the UK National Singles Chart. She then hit n°1 on the UK Hi-NRG Club Chart with her second single Could It Be Magic. Her third single, a dance version of KD Lang's Constant Craving brought her acclaim in 10 countries, particularly the US where it spent an amazing 19 weeks at n°1 on DMA's Hi-NRG Club Chart. Abigail's fourth single Smells Like Teen Spirit entered the UK National Singles Chart at n°29. Her fifth single - Don't You Wanna Know was featured on Interhit 's massive-selling DMA Dance Vol. 1: Eurodance in 1995.

Following the success of her singles, the artist's first album - FeelGood - saw release in 33 countries. Several dance music awards anda few years of solid touring followed until Abigail decided to take sometime off to have her first child, Ilana.

In 1998, Abigail signed with Interhit Records and Let The Joy Rise, with a more mature sound, represented an exciting and new direction for her. Let The Joy Rise was co-written by Janice Robinson of Livin' Joy (Dreamer) and produced by Thunderpuss 2000 (Barry Harris and Chris Cox). It was described as "an uplifting dance anthem packed with emotional vocals and backed by Thunderpuss 2000's powerful signature sound". It is caused a stir in New York & L.A. clubs from a handful of test pressings and Abigail toured touring the U.S. clubs this year in support of this single. An album entitled Nightmoves seemed to have been planned for December 25th 1999 but apparently was never released.

2000 : She was also featured on G & O Project's song Hardworkin' and Lucas' Got To Have Your Love. Both were included on a UK promo sampler called Deluxe Audio Presents: Dig The New Breed. She was signed to Strictly Rhythm Records/Groovilicious and worked with Thunderpuss again to created If It Don't Fit, which was an instant club hit and went #1 in Billboard Club Play Charts.

2001 : Abigail released a single she co-wrote with J. Carrano : You Set Me Free.

2003 : Abigail signed with an independant label, Eden Music (according to other sources, Eden Music was her own production company). She released a new single called Falling, and she declared she was preparing her new album. 5 tracks were already completed.

2004 : Abigail's new album was entitled Home... Again and the release was planned on August. All the tracks were slow, acoustic tracks. Abigail seems to have definitively turned the eurodance page...

2006 : Abigail took part as vocalist and co-writer to 10 Monkeys's single Lay Down.

2009 : she was featured on the track Forever Young (a cover of Alphaville's hit), on DJ Bill Bennett's first album Big Muscle Of The Rhythm. Abigail toured in early 2009 with a new line-up, new songs and a very new sound.

2010 : Be Still My Soul was the tile of Abigail's new full-length acoustic CD, recorded in San Diego and planned for a mid-November release. She also recorded a new dance track in collaboration with The Perry Twins entitled We’ll Never Know.

Listen to Abigail on Radio Euro Classic, the eurodance radio