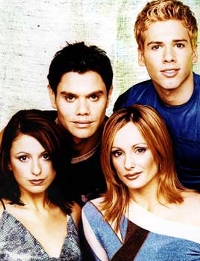 27/02/2020 : ATC former members reunited, but just for a photo. Project could make a comeback for 90s festivals, but with new members (Thanks to Day Dee Eurodance Radio and Paris GayZine)

22/03/2013 : Carolina Marquez feat. Flo Rida & Dale Saunders released a song strongly inspired from Ruki Vverkh Pesenka, which was already adapted by ATC under the title Around the World (La La La La La) (thanks to Andri)

05/02/2012 : ATC's Around The World melody was covered in Gromee Feat Tommy Gunn & Ali Tennant's You Make Me Say. (Thanks to Eurodance Blog)

07/01/2012 : The Disco Boys covered ATC's hit single Around The World (which was itself a cover of a Ruki Vverh song) (Thanks to Tavi Meran)

ATC was a euro-trance project directed and produced by Alex Christensen (U 96, Rollergirl...) in Hamburg, Germany. ATC means "A Touch Of Class". Members were Joe Murray (born July 5th 1974 in Christ Church, New Zealand), Tracey Elizabeth Packham (England), Sarah Egglestone (born in Warrandyte, Australia) and Livio Salvi (born January 25th 1977 in Italy). Most of them had already worked together in the music Cats, and were discovered by Thomas M. Stein.

Their first single Around The World (La La La La) was an instant hit : it stayed #1 during 7 weeks in the German Charts and was played 1500 times in one week on German radio. It peaked #1 in Israel and #15 in UK. It sold gold in France. Around The World was actually a cover of a Russian song called Pesenka released in 1998 by the project Ruki Vverkh (Hands Up in English), and which had already been a big hit in there homeland. The video was shot at the basement of the International Congress Centre in Berlin. ATC released their first album Planet Pop, recorded at Rosengarten Studios and Kingsize Studio, in February 2001. It was renamed A Touch Of Class for the Canadian market. ATC received an ECHO for Best Dance Act.

The follow-up to Around The World was entitled My Heart Beats Like A Drum. It was also very successful. The video was shot in August 2001 at the Cinelicht studios in Hamburg. The following single Thinking Of You was shot in a castle in England. For this single they used a sample from Jacki Graham's 1986 hit Breaking Away.

2001 : Why Oh Why was the last single to be released from the album Planet Pop. The video was shot in the Göteborg studios in Sweden. Then came the very succesful I'm In Heaven, from the forthcoming second album, which was also shot in a studio in Sweden.

2002 : Around The World was used in a television commercial for General Electric in the United States. ATC were featured on the new version of Together that DJ Bobo recorded for his album Celebration. They were also a part of his show DJ Bobo & Friends. They took part to the writing of the single Future in your Hand, for the charity project Hand in Hand for Children. ATC was seen on the 25th of May, at the Grand Prix d'Eurovision broadcasted on ARD.

A new album was planned for release in June, the name was Victory, there were also rumors according to which the name could be different. Finally no album was released in 2002. The next single will be entitled Set Me Free (and not Call On Me), planned for 3rd of June. ATC also released a new single with Karaja called She Moves (La La La).

2003 : after being sued by DJ and producer ATB, ATC had to change their name into A Touch of Class and recorded a new single called New York City. Their album was available in March and was called Touch The Sky. But it was not very succesful. The members decided to split up the same year. Tracey went back to England, she nowadays lives in Birmingham. Former ATC members still keep in touch.

2007 : Around the World was covered by the band BeFour under the name Magic Melody.

2010 : Around the World was sampled in the singles La La La by Auburn featuring Iyaz and in 2 in the Morning by Girlicious.

2012 : The Disco Boys covered Around The World. Later the same year, it was also a source of inspiration for Gromee Feat Tommy Gunn & Ali Tennant's You Make Me Say.