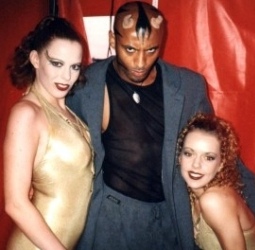 18/05/2015 : Damon Paul and 666 released a single entitled World Of Tuning, which was used as official hymn for Tuning World event which took place in Bodensee between 5th and 8th May. This is a 2k15 remix of Super Fly Chicks (Rock da Place) which was already used for Tuning World in 2007.

The project is produced by Thomas Detert und Mike Griesheimer, the same producers who were behind Activate some years ago. They had also produced projects such as Dyno (There Is Progress), A-Trax (Sweet Lullaby), and Boys On 33 (Slam The Jam).

The members are Diablo (real name : Rene), Karin and Mandy. At first they had some problems due to their conspicuous name. "In the beginning some record shops and radio stations didn't want to sell and play our records. But nowadays people have noticed that our music doesn't concern of satanism. We are just party devils", Diablo tells 'The main idea was that we wanted to come up with something new and special. We watched different bands and their live shows. There were only happy and smiling people. We wanted to put a devil to a stage and do a dark show. That's why 666 was good name for us", Diablo explains. Diablo was actually not the real voice, he only lipsynced on stage.

The newest single Bomba! was released during the Summer 1999, followed by The Demon and more recently D.E.V.I.L., announcing a new album. 'The familiar 666 style continues. We are working with a new album and I think it will be released in the end of the year', Diablo tells.

2000 : 666's following single was entitled Dance 2 Disco, reminding a little bit of the Vengaboys (according to rumors, the chorus was sampled on a verse of Pet Shop Boys - Can You Forgive Her). They also had recently relesed their second album, Who's Afraid Of, in the same familiar 666 style. Then came the singles Salute (released not confirmed) and more recently Supa Dupa Fly (on November 12th 2001). Supa Dupa Fly climbed at 7th position two weeks in a row in the Norwegian Dance Chart, and reached position #26 on the Swedish Dance Chart.

2002 : 666 came back with the title Rhythm Takes Control ; the female vocal parts were based on Activate's single Let The Rhythm Take Control.

2003 : in March, Liah left the group and was replaced by Sarah. In May, their new single was released in Germany only: Insanity. It features remixes by Megara vs DJ Lee, Noemi, and Secotr 5 vs. Dee K. In June they were back in studios to record a new track called Dance Now (Kick It), which would be performed at all forthcomming Live-Shows...

2004 : Their new single will be called Dance Now! and will be released in January. The follow-up will be called Policia. It contains only male spanish vocals and sounds like their old hits. It was released in France under Airplay records in December. Then Edel Records released it in Sweden, Denmark, Norway, Finland and Estonia in January 2005, as well as Airbase Recording for Ukraine and Germany.

The former female dancers left the group and were replaced by 2 new ones : Sam and Carry.

2005 : they released a new single called Supa Dupa Fly 2005. Meanwhile, 666 producers started a new project called Vinylshakers, under which they also contributed to the welfare project Help Asia. They covered a song of Murray Head called One Night In Bangkok.

In November, a single entitled Atencion was released by 666 in collaboration with DJ Bonito. It contained the voice samples sounds of their old single Amokk, combined with the melody of Shaun Baker Explode.

2006 : 666 are currently in studio to record a brand new track. They will release a collection of rare mixes and previously unreleased tracks by the end of this year. All tracks are completly re-recorded in 24bit and digitally remastered for the very first time, with really rare unreleased items such as The God, Le bruit de la porte, La formula and Superstar DJ. Called The Ways Are Mystic, this "Best of..." will be followed by a completly new album in April or May 2007 and a new single probably in March 2007. The albums Paradoxx and Who's afraid of? will be totally re-recorded and remastered as well, to be re-issued by fall 2007 probably.

2007 : 666 are back for good ! Their brand new single will be entitled Abracadabra. It featured Spanish male vocals only with technoid sounds and a RnB rhythm. 666 are now Demon with 2 new female dancers : Sina and Lena.

666 are working on a record together with Brooklyn Bounce.

2010 : 666 vs. Tag Team single Whoomp (Supa.dupa.fly) was released in Germany. It's a mash-up between their hit Supadupafly and Tag Team's hit Whoomp (There It Is). It went #19 on the German DJ Chart.